FUKU-NO-WA Project: Promoting the Sustainable Use of Resources 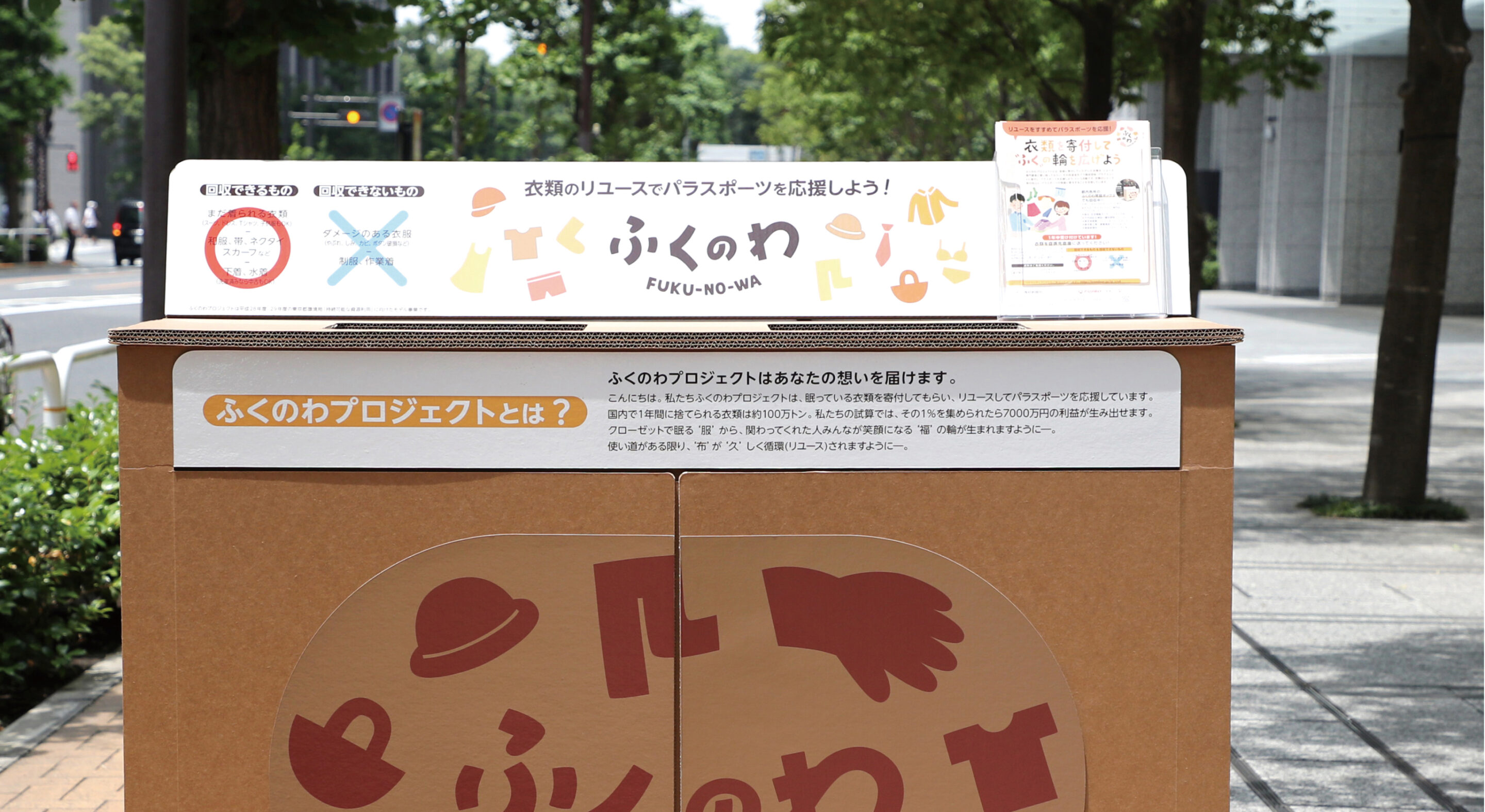 The Fujibo Group, which promotes SDGs management, is working to contribute to the resolution of social challenges such as sustainable use of resources through the "FUKU-NO-WA Project," a clothes recycling activity. The representative in charge of the project talked about the origins of the "FUKU-NO-WA Project" and its current initiatives. 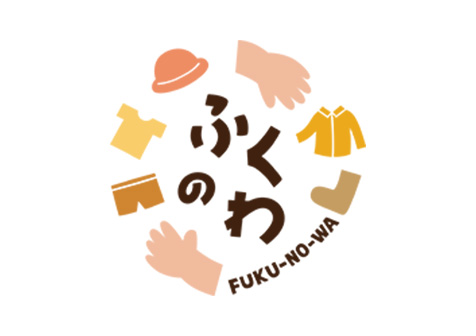 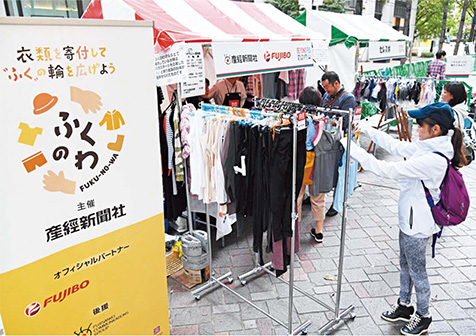 It is an activity to reuse usable clothes donated from companies and individuals, sell them to domestic or foreign specialized dealers or at "Fuku-No-Wa Marché", and donate the sales proceeds to parasports associations. This project was hosted and managed by Sankei Shimbun Co., Ltd. and selected as a "model business for sustainable use of resources" by the Environmental Bureau of the Tokyo Metropolitan Government in 2016 and 2017. The Fujibo Group agrees to the purpose of the activity and joins it as an official partner.

- What is the FUKU-NO-WA Project?

FUKU-NO-WA is a project to support Parasports by collecting clothes donations from people and use the proceeds from the sale of the clothes. Specifically, the proceeds are used to pay for the production of uniforms for the Japanese national parasports team, and to pay for dispatching para-athletes to schools that are involved in FUKU-NO-WA activities.

- How did you start the FUKU-NO-WA Project?

Before starting the FUKU-NO-WA Project, Fujibo had supported parasports (sports for people with various disabilities), such as wheelchair tennis, famous for Shingo Kunieda, who won the gold medal at the Tokyo Paralympics. When I visited the venues as a supporter of parasports, there were many things that I found worrisome. For example, many people with physical disabilities visit parasports competitions as audience. However, the venues are not barrier free, making it difficult for them to watch the games! Parasports cost a lot of money too. While we were thinking about what more we could do, we learned about the FUKU-NO-WA Project from a newspaper company. FUKU-NO-WA Project originally started as an in-house collection project for the newspaper company. I agreed that this was a good fit with what our company was trying to do.

Since then, while promoting the SDGs (Sustainable Development Goals), we have continued the project with the basic objective of supporting sports for people with disabilities. 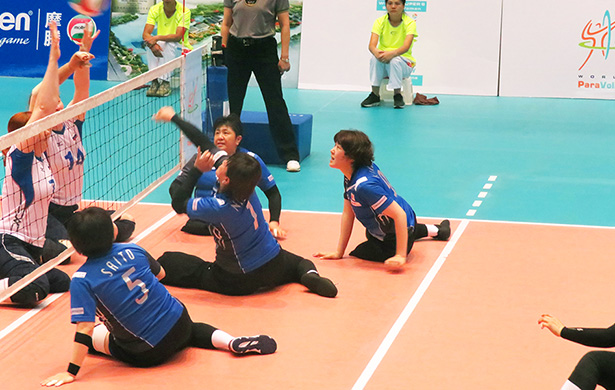 - What kind of organizations are you currently supporting?

- How do you collect the clothes donations?

We have set up "FUKU-NO-WA Donation Boxes" at eleven locations in Tokyo (as of September 2021), and also accept walk-in donations to our partners' warehouses. However, due to the COVID-19 pandemic, it has become difficult to have people bring them to these locations. Therefore, in July 2020, we started a home delivery kit called "Ouchi de FUKU-NO-WA (FUKU-NO-WA from home)". This is a kit for people to buy a large bag, put their clothes in it, and send it to us. The bag was designed by a user of a facility for people with disabilities managed by the Sankei Shimbun Welfare and Culture Organization. In this way, the scope of our activities is expanding steadily. Fujibo Holdings, Inc. regularly conducts in-house collection of clothing to be donated to the FUKU-NO-WA Project at the Tokyo Headquarters. 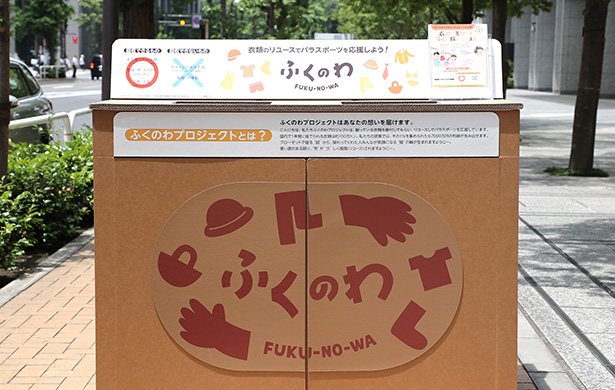 - How do you reuse and recycle the clothes you collect?

The clothes collected through donations are first collected at a domestic warehouse, where they are used to select clothes to be displayed and sold at the FUKU-NO-WA Marché, a reuse charity sales event held in Japan. The rest of the clothes are sorted at a second-hand clothing factory in Malaysia, and then delivered to more than 15 countries around the world, including India, Pakistan, and Cambodia, according to the climate of each region, where they are sold again at clothing markets.

- What do you do with the clothes that are donated but cannot be worn?

We recycle used clothes that could not be turned into products in different forms, such as rags (cloth used for cleaning machinery and equipment). In fact, the effort to recycle collected clothes into rags has existed for a long time, but the effort to reuse the collected clothes to sell them again has not progressed. This is why we joined the FUKU-NO-WA Project, hoping that we could support parasports by promoting reuse. 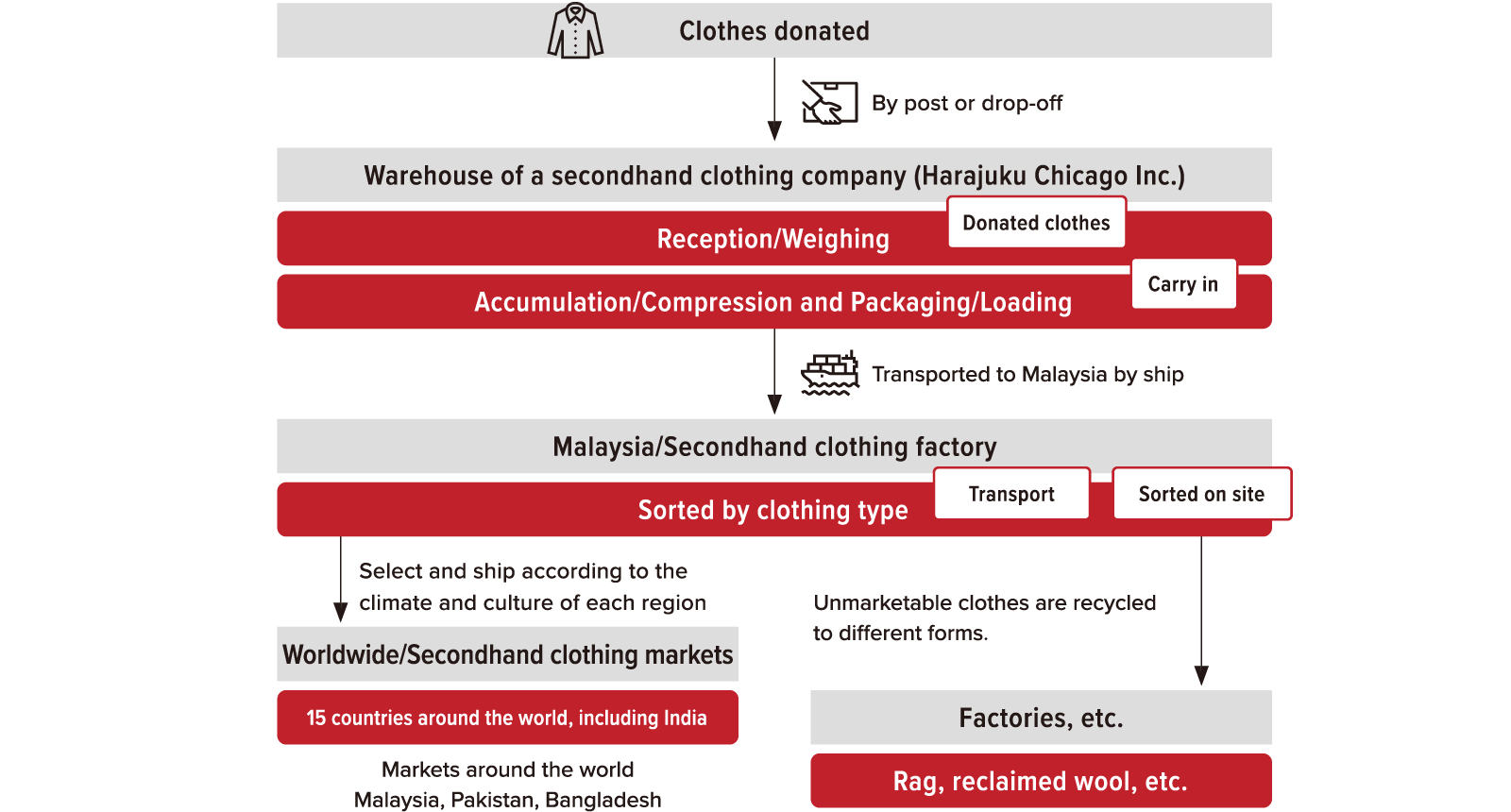 - Please tell us about the management structure of the project.

Fujibo is the official partner of the project. The Fuji Sankei Group and JAFIC (Japan Apparel and Fashion Industry Council) support the project, and 11 organizations including Setagaya Ward and Toshima Ward collaborate with us. The project started in 2016 and has been running for five years now. As of September 30, 2021, the cumulative total of donated clothing is approximately 500,000 kg. (As of September 30, 2021)

- Have you seen any changes in the society after 5 years of the project?

When we hold the "FUKU-NO-WA Marché," an event to sell the collected clothes for charity, we feel that the number of ordinary people who participate in the event has been increasing since the beginning of the project. People's awareness of the need to incorporate reused clothes into their daily lives is steadily taking root. Fujibo is contributing products such as the underwear "B.V.D." 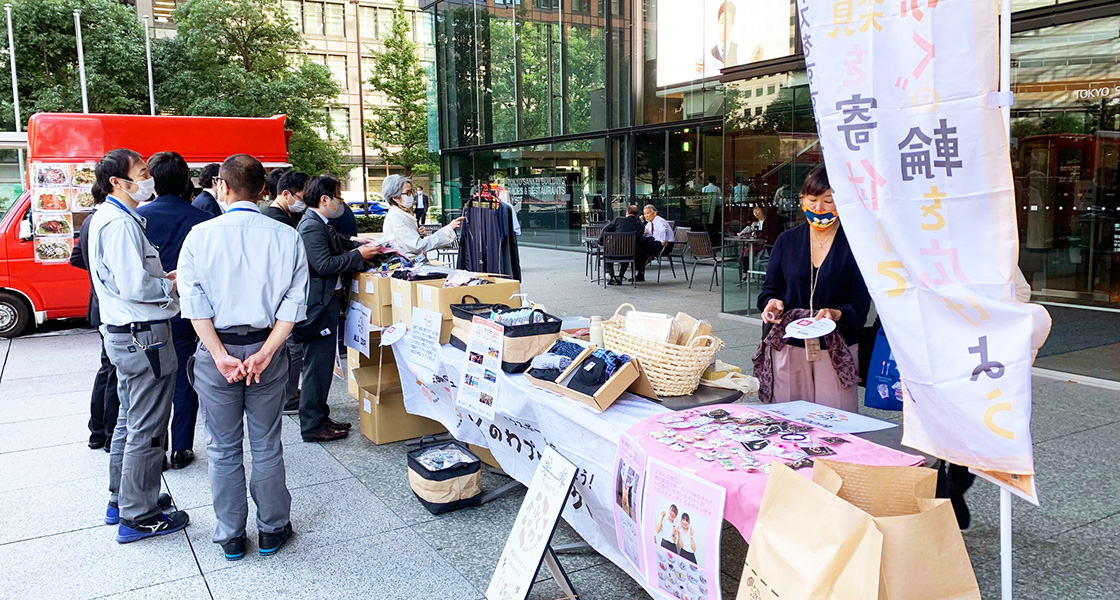 - I can see that people's awareness of reuse is increasing. Is increasing the amount of donations one of your goals?

Of course, it is one of our goals to increase the amount of donations, because more donations means more money to support. Not only that, however, I now feel a strong desire to raise the awareness of the entire world and Japan as a whole. As part of this effort, we are now asking elementary and junior high schools across the country to donate clothing and artwork, as well as hold awareness-raising events. I think it is important for people to be aware of this issue from their childhood.

- I agree that enlightenment activities are important. How do you plan to expand and develop your activities in the future?

Most recently, the FUKU-NO-WA Project co-sponsored the ParaCanoe Association's one-day experience event held in Kasumigaura, Ibaraki Prefecture. We provided "B.V.D. Power Athlete" sports towels to the participants. We are looking forward to participating in more parasports events in the future.

The FUKU-NO-WA Project agrees to the principles of United Nations Sustainable Development Goals (SDGs) and aims to contribute to five goals out of 17 goals through promotion of reuse of clothes. 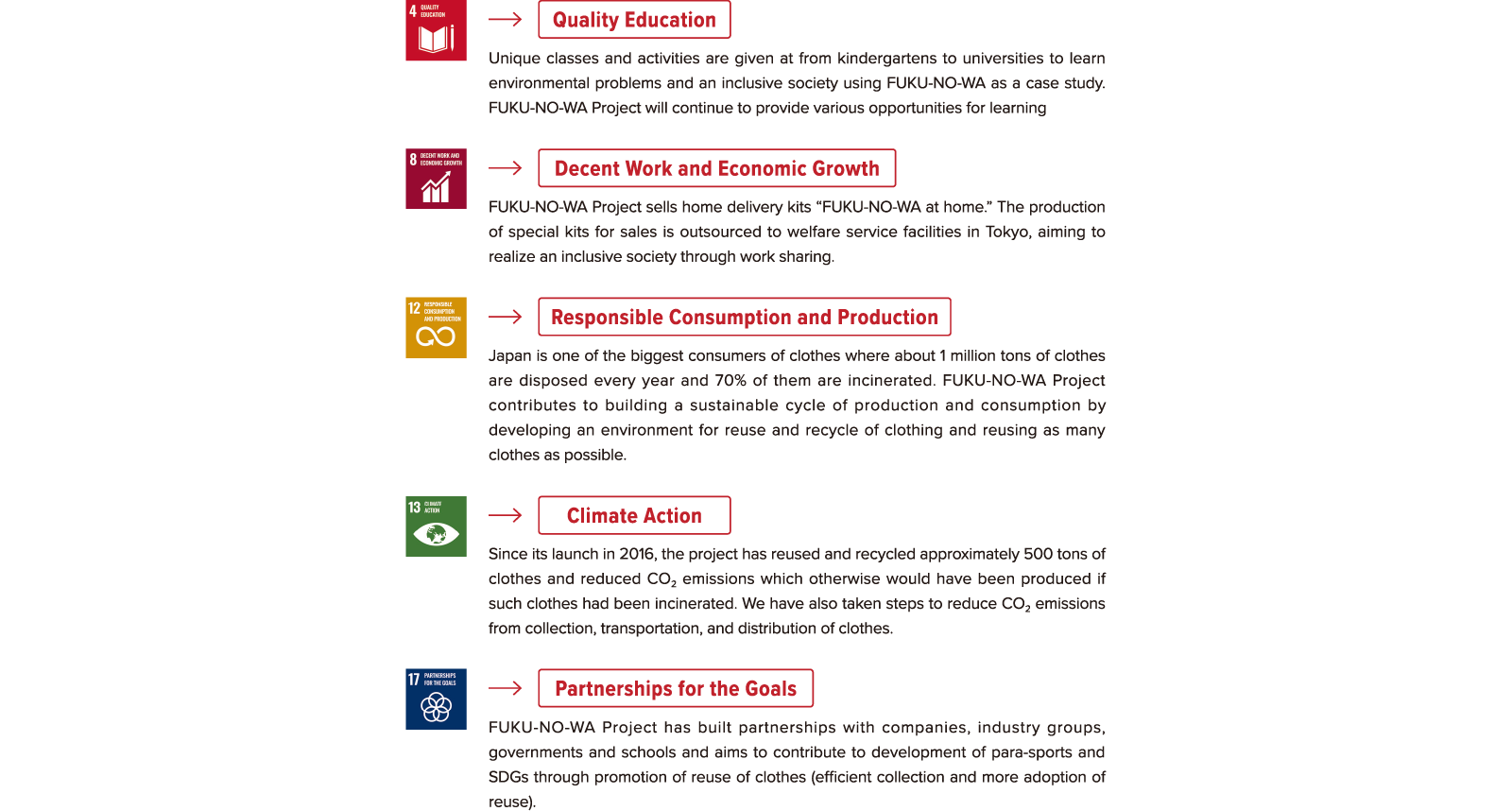